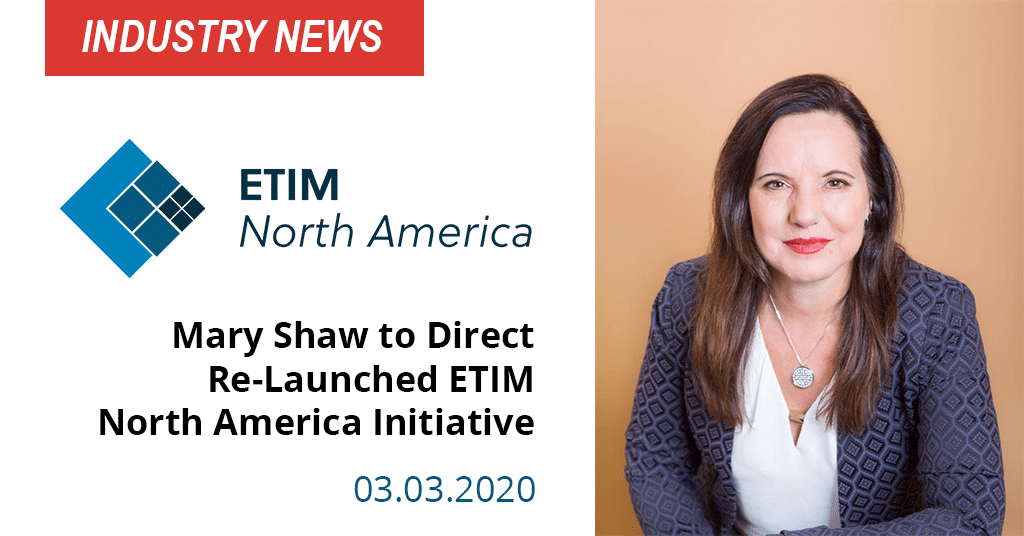 North American electrical industry veteran Mary Shaw has been announced as the executive director of ETIM North America, a non-profit association charged with promoting and maintaining the ETIM global technical data classification standard in the U.S., Canada and Mexico.

ETIM North America (NA) is one of 22 ETIM federations around the world dedicated to propagating the ETIM classification model to assist manufacturing and distribution companies with the exchange and digitization of product information throughout the supply chain, to end users and to engineers and architects.

In addition to translating the ETIM model into North American English, French Canadian and Mexican Spanish, ETIM NA is responsible for identifying additional products, features and values pertaining to goods being sold into the North American wholesale market.

Shaw has more than three decades of experience in data standardization and has been a key player in the ETIM community for nine years. She has served on the executive board of directors of ETIM International, the governing body of ETIM and its partner federations, since June 2018, and was appointed vice president in June 2019. Shaw’s role will continue to focus on educating manufacturers and distributors in the electrical and related C&I markets as to the benefits of ETIM classification, which include a number of process improvement and cost reduction opportunities for both manufacturers and distributors.

“There is a lot of operational efficiency and improved customer experience that come as a result of everyone ‘speaking the same language’ to some degree,” says Shaw. “Everyone down to the end user benefits from a common structure that enables efficient and unambiguous communication across a global community offering and looking for technical products.”

Shaw previously led the data and electronic exchange standards development efforts for over 16 years at Industry Data Exchange Association (IDEA), the former host of the ETIM North America initiative since 2015.

“Mary’s fluency and experience with ETIM are second-to-none in the industry, making her a natural and obvious choice to spearhead ETIM NA,” says Matt Christensen, president of both ETIM NA and DDS, the technology and product content solution provider who, as a founding member, helped establish the association to revitalize the ETIM NA community.

ETIM NA’s initial focus will be enhancing and completing the classification standard for North American electrical products. This is essential in helping electrical manufacturers and distributors compete in other geographic markets, as well as serve their international customers.

Now approaching its eighth version (a new release is expected in September), the ETIM model is used by global manufacturers, distributors and end-users doing business in dozens of countries, and is currently offered in 17 languages. According to Shaw, as global business dynamics and e-commerce initiatives are gaining momentum, so too is ETIM as the global standard that is helping the wholesale distribution industry adapt to the changing technical landscape and propel its associated companies into the future.