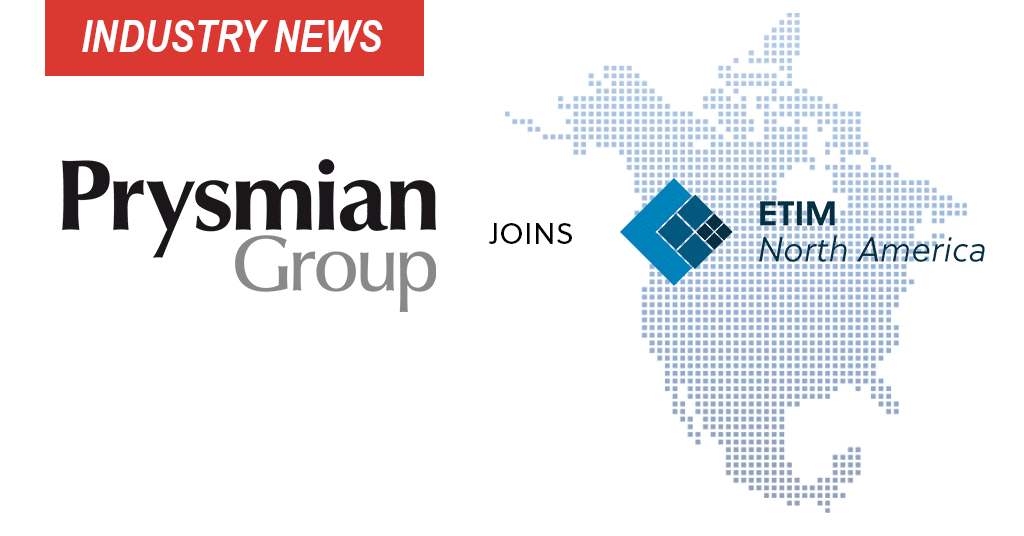 By ETIM North AmericaDecember 17, 2020No Comments

Prysmian Group is a global leader in the energy and telecom cable systems industry and the largest manufacturer of cables in the world. The company consists of a number of brands, including the commercial brands Prysmian, Draka and General Cable, and is an industry leader in digitalization and sustainability.

A global pioneer in ETIM Standardization, Prysmian’s commitment and involvement is fitting as the model approaches its 20th anniversary. ETIM was originally developed for Europe’s electro-technical sector, and its first product category was actually “Cables”. “The ETIM standards are fundamental for the most efficient classification and with that the access to exchange the correct data in multiple languages to make our cables, concepts and sustainable solutions visible and available in all search engines,” said Rob Van Veen, Prysmian Group Senior Vice President Energy & Infrastructure.

Prysmian Group North America is the latest in an impressive list of suppliers participating in ETIM NA’s collaborative efforts to improve the quality and communication of product information through refinement of the ETIM classification model relative to the North American electrical market. ETIM NA is one of nearly two dozen federations supporting the ETIM model and its member communities worldwide.

Now offered in 17 languages, ETIM is used worldwide by manufacturers, distributors and end-users doing business in dozens of countries.

“We view the ETIM classification standard, and its role in overall digital acceleration, as critically important to the future of our industry,” says Brian Moriarty, Senior Vice President Sales T&I at Prysmian Group North America. “This collaborative model is helping fill a huge need as far as data quality across the entire global supply chain, and the North American market is essential to that effort.”

A language-independent classification model, ETIM facilitates the flow of consistent, quality product information regardless of language or technology platform. This proven approach has wide-ranging benefits for all users of information within the electrical ecosystem. According to ETIM NA’s Executive Director Mary Shaw, the success of the model starts with having product experts from manufacturers like Prysmian—as well as other “downstream” specialists like distributors—participate on ETIM NA-led committees to help refine product categories and their associated products, features and values.

Another benefit to manufacturers Shaw notes is that “ETIM can help de-commoditize products, which is an issue for brands who are concerned with the state of their product data as distributed by current processes.”

Shaw also reiterates that, while a global standard, ETIM is not just for international commerce: “Even those manufacturers, distributors and other industry professionals without global reach appreciate how ETIM helps streamline the communication of data and makes it easier to do business with their trading partners.”

According to Shaw, product experts (PEs) from several ETIM NA member companies have been meeting virtually to advance the Power Distribution and Automation and Drives product categories for several months, and committee activity has just started around Wiring Devices/Lighting Controls and related product categories, with PE committees scheduled for these and other categories over the next several months.

Based in Highland Heights, KY, Prysmian Group North America operates in the United States and Canada. In July 2018, the Group finalized the acquisition of General Cable resulting in combined operations that include 23 plants, 6 R&D centers and over 5,800 employees. In 2018, Prysmian Group North America’s combined net sales totaled $4 billion. The Group is strongly positioned in high tech markets and offers the widest possible range of products, services, technologies and know-how. A world leader in the design, manufacture and sale of wire and cable products, Prysmian Group North America’s business units include power distribution, specialty, telecoms, trade & installers and energy projects (HV). Prysmian Group is a public company, listed on the Italian Stock Exchange in the FTSE MIB index. Additional information is available at na.prysmiangroup.com.