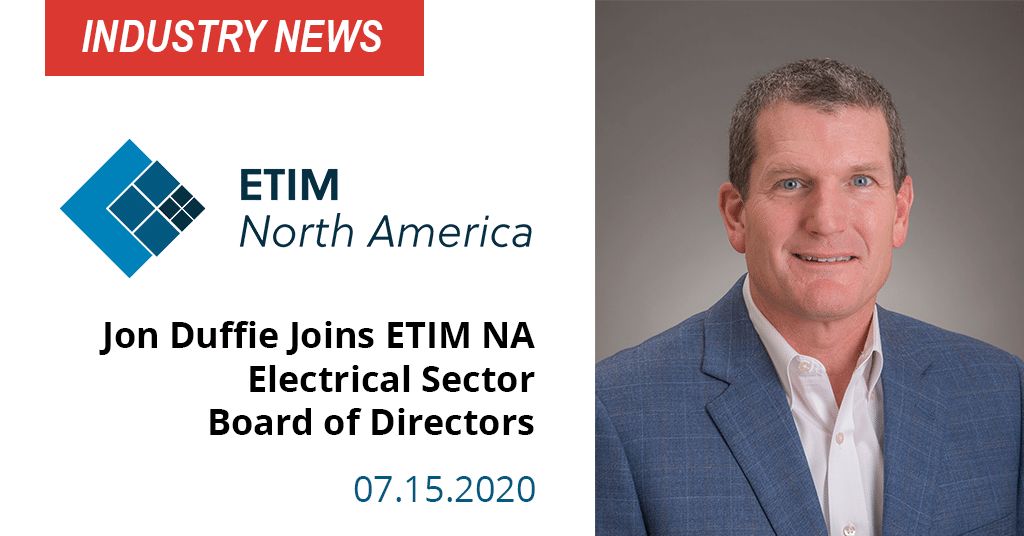 ETIM North America (NA) is pleased to announce that Jon Duffie, Director of Channel Management at Siemens, has been appointed to the board of ETIM NA’s Electrical Sector.

As a member of the Electrical Sector board, Duffie will work alongside David Oldfather, sector lead and president/CEO of IDEA, to achieve the group’s mission of driving adoption of ETIM product classification standards through membership recruitment, product committee engagement and prioritization, industry advocacy and other sector-specific activity.

One of two dozen regional ETIM federations worldwide, ETIM NA is charged with supporting the implementation and adoption of the ETIM Technical Information Model in the North American wholesale electrical industry, and associated verticals.

Duffie says he is “looking forward to working with manufacturers and their distribution partners to bring ETIM’s product classification model to the North American electrical channel. Siemens has been involved in ETIM in other countries and we’re very excited about supporting and developing potential use cases across the industry.”

One of the world’s largest producers of energy-efficient, resource-saving technologies, Siemens is a leading supplier of systems for power generation and transmission as well as medical diagnosis. As a member of ETIM NA, Siemens already has product experts participating on working committees, actively involved in translating the model and helping to identify additional products, features, and values pertaining to products being sold into the North American wholesale market.